Located within the charming, multifaceted city of Cypress TX, the master-planned, 700-acre strong community of Miramesa has a lot to offer potential residents. Simply put, whether you want to buy, or if you are more interested in homes for rent, this community is going to take your breath away. In the first place, you are going to want to keep in mind that this community is part of a larger community of master-planned communities, known as Canyon Gate. This is a highly regarded group that has worked with some of the top Texas home builders, including Lennar, Coventry Homes, Darling Homes, and many others. They have built communities that emphasize security and small-town charm with big city features just a few miles away.

There are a ton of benefits to Miramesa that you will want to learn about, beyond the fact that Cypress is a perfect place for families, singles, or even those who want to retire.

With an average rent of 2000 dollars, this community combines luxury with affordability to create one of the most appealing opportunities to be found anywhere. Cypress TX is a city that is home to more than 160, 000 people. This gives Cypress the distinction of being large enough to give you everything you would want from your surroundings, while also being small enough to give you the sense that you are part of a small, intimate community. For those who need to commute to Downtown Houston for work each day, the appeal of Cypress is understandable. To be sure, living in a community like Miramesa means you are just twenty-five miles away from Downtown Houston.

At the same time, Cypress is also supported by everything you might expect from a community. The homes for rent throughout this town will give you the ability to take advantage of the Cypress-Fairbanks Independent School District, a number of parks, restaurants, golf courses, entertainment spots, and retail establishments. Furthermore, you aren’t very far from The Woodlands either! At the same time, remember that Cypress also offers its own major employment centers. Cypress can exist easily on its own, but the closeness to Downtown Houston is definitely a perk. You are going to be near Downtown Houston, but Cypress TX isn’t so close as to make you feel you live right next to Houston. At just twenty-five miles away, Cypress enjoys a closeness to Downtown Houston, while also being far enough away to give you the peaceful respite from city life that you need.

Property information sent to your email 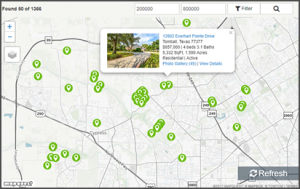 Not Yet Sold On Homes For Sale in Cypress, TX? View More Homes
Homes in Cypress